Previously:
Scroll down for reviews of

I do have to rewind a bit, since our day officially started at LAX, and I'm sure AirlineReporter's editor-in-chief David Parker Brown and airline guru Johnny Jet would get a kick out of hearing that our honeymoon started with them (and I hope my wife doesn't read this part!).

Fast forward to arriving at San Jose Airport in the afternoon. We grab our rental car from Avis (see below) and decide that we're hungry, so we do a quick detour to one of San Jose's Vietnamese districts to have a snack... a steaming hot bowl of Bun Bo Hue, or spicy beef noodle soup that's a specialty of the central region of Vietnam surrounding the ancient capital of Hue.

Oh, and I forgot the addition of HOT chili oil to finish. Add herbs, julienned cabbage, sprouts, and a squeeze of lime to your liking, and enjoy.  I would say An Nam is one of the Top 3 (if not the best) bun bo hue places in California. 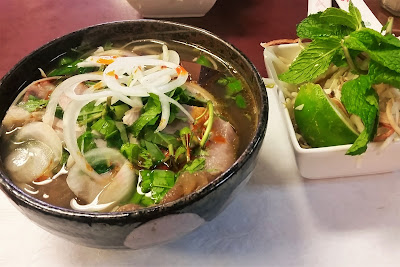 After getting our soup on, we head towards our hotel, the Hyatt House Belmont/Redwood Shores (see below) to check in and leave our luggage in the room (we get upgraded to a King Suite) before going to check out nearby Half Moon Bay.

While my wife was excited at going to Half Moon Bay (I haven't been myself), the actual result was a real disappointment. Besides the gloomy weather, there just wasn't much there, and it wasn't very picturesque. Sure, there's a sandy beach, but we have those in LA/OC too. Even driving through their Main Street was a downer. It seemed like it had potential, but it was just a slow, quiet town... we didn't even bother taking any photos. They were getting ready for a pumpkin festival, but that was a couple weeks away.

We head back towards our hotel and stop at a Target store to pick up some essentials we had forgotten to pack.  After dropping Kat off at the hotel, I go pick up some takeout dinner at The Habit in nearby San Mateo (1100 Park Pl., Ste. 20 | Yelp)... I figured I would get my last real burger for a while. I had a Mushroom Charburger, Kat had the Teriyaki Charburger, and we shared Sweet Potato Fries and Tempura Green Beans... all delicious (sorry, no pics, we were totally hungry).

With plans to head into San Francisco, we hit the hay early to get a good start the next morning. We manage to get up around 9:30am and head downstairs for the hotel breakfast, which was meh. Plus we were saving ourselves for a treat in "the city," a freshly fried Chinese donut, or egg puff.

We check out and start heading towards the city, stopping at the Hyatt Regency San Francisco Airport to drop off some stuff to store (they were happy to do it), since we would be staying a night there when we come back. No need to carry extra weight in our backpacks!

We head to Shanghai Dumpling King in the Outer Richmond district of San Francisco (3319 Balboa St. | Yelp), which we don't actually recommend for the dumplings themselves, but they make a darn good egg puff. They're stupendous alongside some warm soy milk. 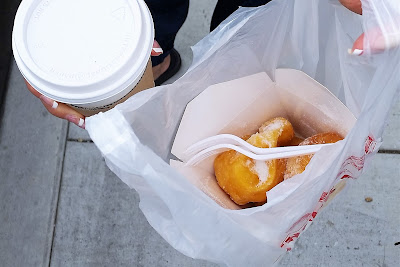 There's a long line waiting for a table, so we put in our order for takeout and walk around the area, grabbing a latte at the quaint Simple Pleasures Cafe (3434 Balboa St. | Yelp) and okay dim sum items at Jook Time (3398A Balboa St. | Yelp).

After our city stop, we head down to Skyline's Cafe in Daly City (87 Skyline Plaza | Yelp) so Kat can pick up some food for the flight, as she suspects that she won't let what they'll have to offer. Generally, bringing your own food is a recipe for success, especially on a long flight, but I'm a sucker for food in little plates on trays, so I roll the dice on the airplane food.

Kat orders some very tasty Hainan chicken with that special rice they make from the broth of the chicken. They also have a special chili oil that they mix with shredded pork. I'll admit, on the the flight I put some of this chili oil mix into my food and quite enjoyed it.

With sustenance in hand, we head off to San Francisco Airport, just a 10-15 minute drive away.  The car rental center at SFO is also separate, about another 5 minute drive away. Thankfully, my status with Avis entitles me to valet service, where someone drives us in our just-returned car back to the terminal. Very handy at places like SFO, where most people have to schlep it with their luggage to an airport train, up and down a series of escalators or elevators.

We get dropped off right at the curb, and head inside to check in for our flight...

Skip Ahead: Flight Review - SFO-CDG on an Air France A380 in Premium Economy; CDG-IST on an A320 (coming soon).

After arriving into Terminal A at the San Jose Airport (SJC), we follow the signs to the Rental Car Shuttle stop. SJC has a centralized garage for all the major rental agencies, located across from Terminal B.  In fact, it probably would have been a 5-7 minute walk from Terminal A, but there was already a bus at the stop, so we ride it for about 2 minutes until the next stop at the Rental Car Center.

The center was quiet with no lines anywhere. We head up to the Avis Preferred counter to find out what car had been preassigned to me.


Pro tip: Why stand in line? Sign up for a car rental company's respective frequent renter program for free, and skip the long lines at the regular counter. Most of the time you head straight to your car and drive away, and if you need to talk to someone, you have access to a counter with shorter lines.  You can also collect credits towards future rentals and elite status. Did I mention that it's free?

I had made my reservation for a one day, one-way rental, since I was flying out of San Francisco (SFO) the next day. Unfortunately I had a Chrysler 300 waiting in my spot. As a rental car, it's terrible. I don't find it particularly attractive. The handling is spotty, and it guzzles more gas than it should.

I head back to the Preferred counter to see what else is available. The previous weekend rush cleared out most of my preferred vehicles, so the agent gets the manager on the phone, and he comes to the counter, authorizing anything out of their "Upgrade" aisle.

There are only a few cars there, but I settle on a black BMW 528i... not the greatest car, but better than the 300. They also had a Lexus LX570 on the Upgrade line, which the manager said was a mistake, but I could take if I had wanted. It was a little too big for my purposes, so I declined.
I much prefer the Cadillac XTS for a luxury rental because of the way it's equipped from Avis:

Hyatt is our preferred hotel brand, as Kat has top-tier Diamond status in their Gold Passport program.  They have a great redemption option by way of "points + cash" where point costs are halved if you pay a co-pay. This can be a tremendous value at the lower tiers, or if the hotel itself is undervalued.

The Hyatt Regency San Francisco Airport (website | TripAdvisor) wasn't available, so we went away from the city with the Hyatt House Belmont/Redwood Shores (website | TripAdvisor). While not directly within the airport area, the property is only a 10-15 minute drive south by freeway. It also puts us in a great spot for getting to Half Moon Bay or over to the East Bay, as it's near the junction of Highway 92 and the San Mateo Bridge.

The hotel is tucked behind a large luxury car dealership (brand initials are "M.B."), next to a man-made pond that provides a faux water view (and I'm ok with that). Check-in is quick, friendly, and chatty. We reserved a standard room, but are upgraded to a one-bedroom king suite, located just above the main entrance... no elevators on the property, but it's just a short walk upstairs. Fortunately it's pretty quiet and we don't hear any noises in our room.

The Hyatt House brand is designed for extended stays, so our suite comes with a full kitchen, dining area, and living room separated by double doors from the bedroom and bathroom. This room has skylights, which give it an open, airy feel. ... definitely recommend the upper floors if you can deal with the stairs. Very clean and modern, it was a very comfortable stay, kind of like crashing at a friends place. 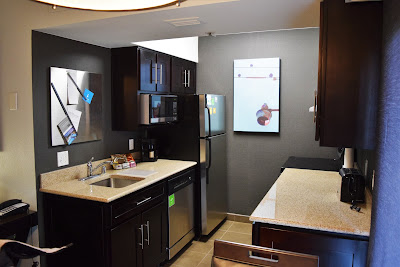 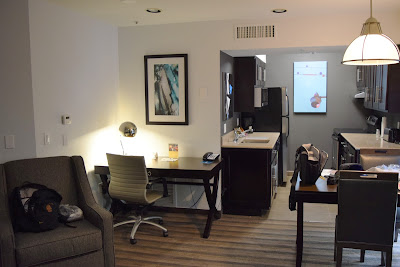 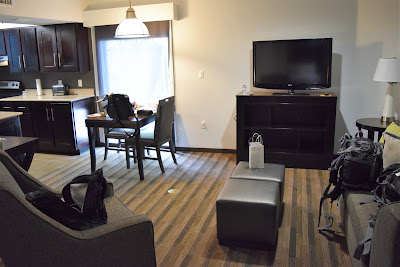 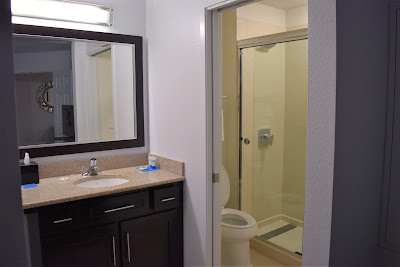 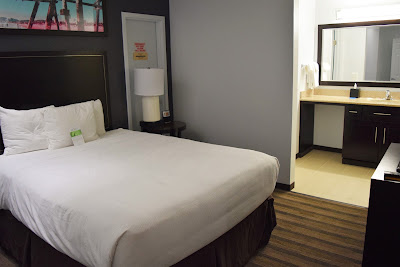 A stay at a Hyatt House includes breakfast, so we head downstairs to find the typical American breakfast spread. Hot items include scrambled eggs, sausage links, waffles, and breakfast potatoes. There's also cereals, oatmeal, breads, fruit, pastries, yogurt, and juices, as well as a coffee/tea station.  The breakfast was filling and adequate, but I wouldn't say it was very good.  This isn't to say that Hyatt Houses don't offer a good breakfast; we stayed at the property across the bay in Emeryville, and I would actually call that a tasty meal. Either way, the cafe area was packed, so at least the food was being refreshed constantly. 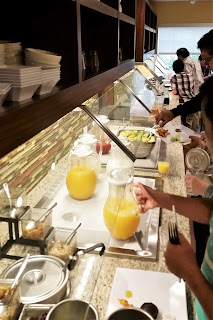 I would likely stay at this property again, thanks to the service, room, and location.

Next Up:
All photos by VNAFlyer, unless noted otherwise. 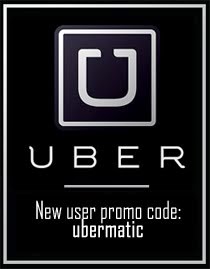